More than ninety leaders from churches around Scotland gathered in Crieff on Sunday, 15 January, for a Scottish Mission church officers' orientation day. The event, which has become an annual institution, was described by one seasoned elder from Aberdeen as "one of the best events so far." 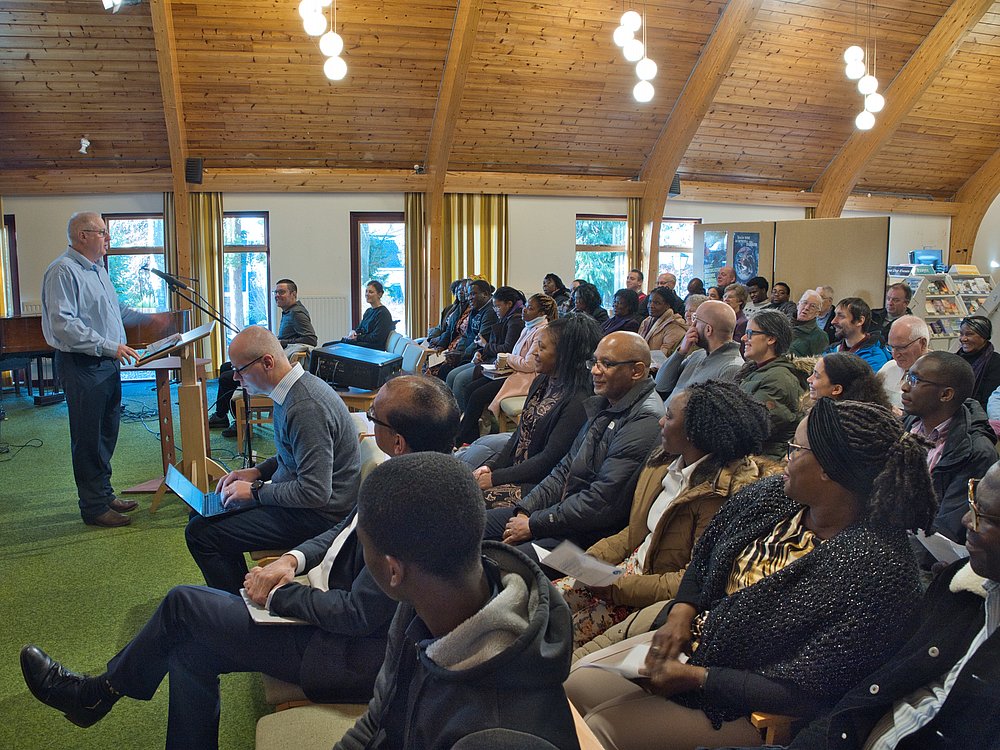 Pastor Jimmy Botha, President of the Adventist Church in Scotland, was pacing as the 10 am starting time came close. The Stanborough Press Bookshop had been set up and was getting ready for a roaring trade. More than ten departmental directors and officers from the British Union Conference had prepared their spaces in classrooms around the church for their seminars. The Children's Ministries department was ready to look after any children that had arrived, and they had ordered lunch, and plenary speakers were prepared to go on stage. "We're at the point where we cannot do much more," he said. And then the cars started to arrive. At first, it was a trickle, but soon they came in from Paisley and Faifley, Edinburgh, Dundee, Aberdeen and further afield. The day had well and truly begun. 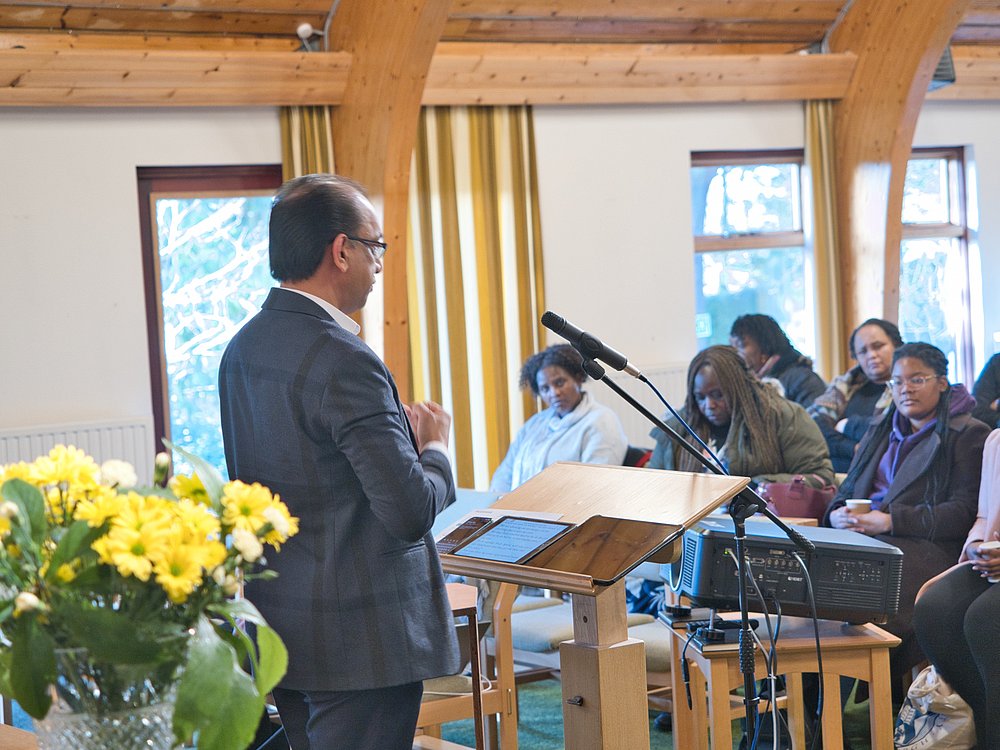 Pastor Wilfred Masih was the first to step up to the podium. His devotional recalled the inspiring verse from Zechariah, "'Not by might, nor by power, but by My Spirit' says the Lord of hosts." He spoke about the seeming difficulty of mission in the times that we live in. "We cannot win this battle by force," he said. "It requires an altogether different approach in which we tune in to the Spirit of God and respond to God's leading in our relationships and activities." He emphasised the importance of leaders making themselves available and availing themselves of training to build skills and experience. "Such an investment will build confidence and strength. We will realise Scripture's promise, and we will become 'Sons of the anointed' – that is – 'sons of fresh oil'. We will become a blessing to others as we build up God's temple in this part of the vineyard."

The day's keynote speaker was Anthony WagenerSmith, the Director for Adventist Mission at the Trans-European Division. In a presentation filled with take-home nuggets, he encouraged the church in Scotland to embrace a biblical model of church growth, which incorporates growth by addition and multiplication. 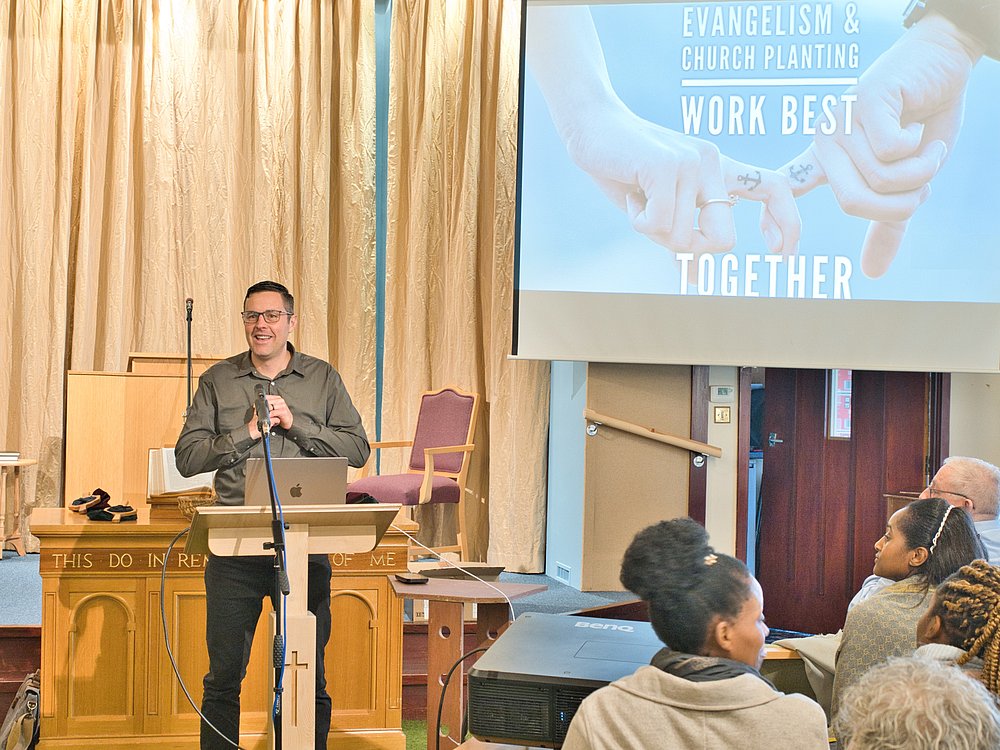 The 'Growth by addition' model was followed by the early Christian church in Jerusalem: "And the Lord increased daily together such as should be saved" (Acts 2:47). The 'Growth by multiplication' model found its impetus in Antioch. Antioch sent some members to other cities to establish new communities of Jesus' followers and worshippers.

Pastor Anthony provided a strong argument, showing that the church would almost certainly not exist today if it was not for multiplication. "Many of the early churches of two millennia ago are ruins today, but the church is now a worldwide movement that still has the potential to thrive. This situation would not have happened without multiplication."

"To grow by multiplication, and not only by addition, does require some adjustment of emphasis in local churches," explained Pastor WagenerSmith. "If we only focus on addition, our churches become quite bogged down by constant programmes, which use almost all the available energy that volunteers and pastors can offer." He argued passionately for a simpler church set-up in which we do not put our energies into programmes but free pastors and volunteers to start new relationships and build new communities. "We should encourage a culture of service," he said. "When people get baptised, it should not be a case of saying, 'welcome to the club!' Instead, we should say, 'welcome to the mission!'"

He also encouraged elders and experienced leaders to take on the challenge of starting something new. "Many leaders feel that their congregations are stagnant and have lost momentum." Using the example of a car that breaks down on a motorway, he said: "It is not a shame to get out of a broken car. It is the best way to proceed. Taking a risk to start something new will bring life into a new community, it will rejuvenate a community in which the status quo had become very strong, and it will be a thrilling experience for the leader who chooses to take on the challenge."

Pastor Anthony WagenerSmith reassured the gathered church leaders that an emphasis on multiplication is an approach that works exceptionally well around the world. He provided examples of exciting initiatives in cultures like we have in Scotland. "Growth, by addition, is important," he said, "But there will eventually be a time when we run out of members to recycle. We need to incorporate both approaches in our practice." 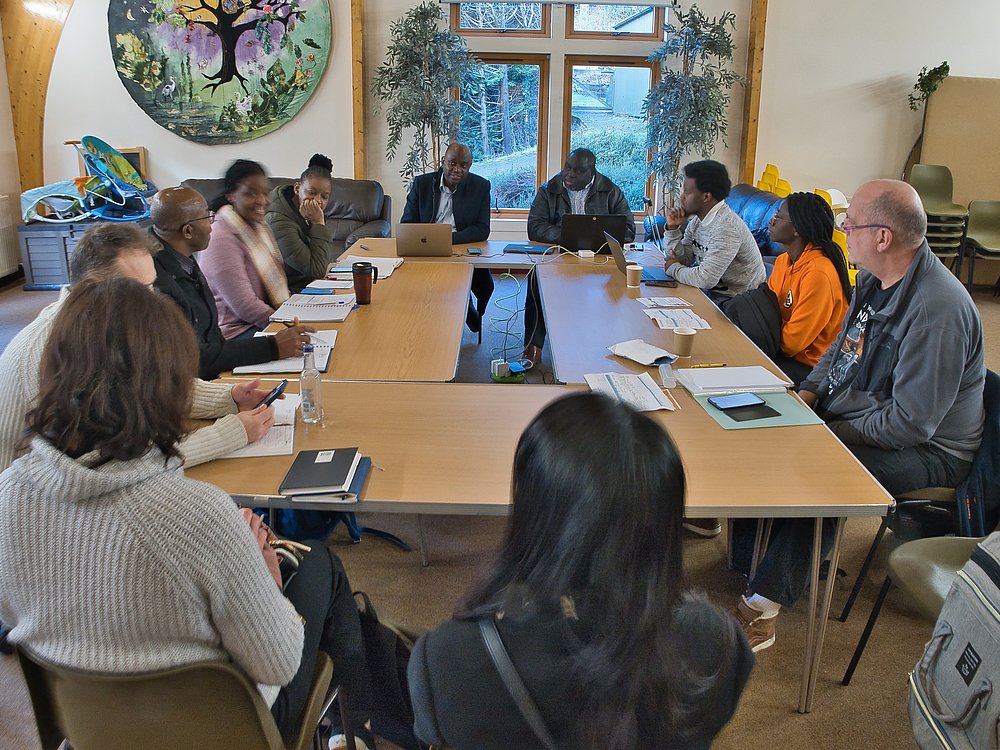 Following this rousing presentation, it was time to get down to departmental business. Attendees joined various small groups led by multiple departmental directors from the British Union Conference to gather information and skills on the diverse aspects of church life. There were presentations for treasurers, church clerks, elders and deacons, communication officers, women's, and health ministries. The youth and pathfinder departments consulted with young people about the mission. 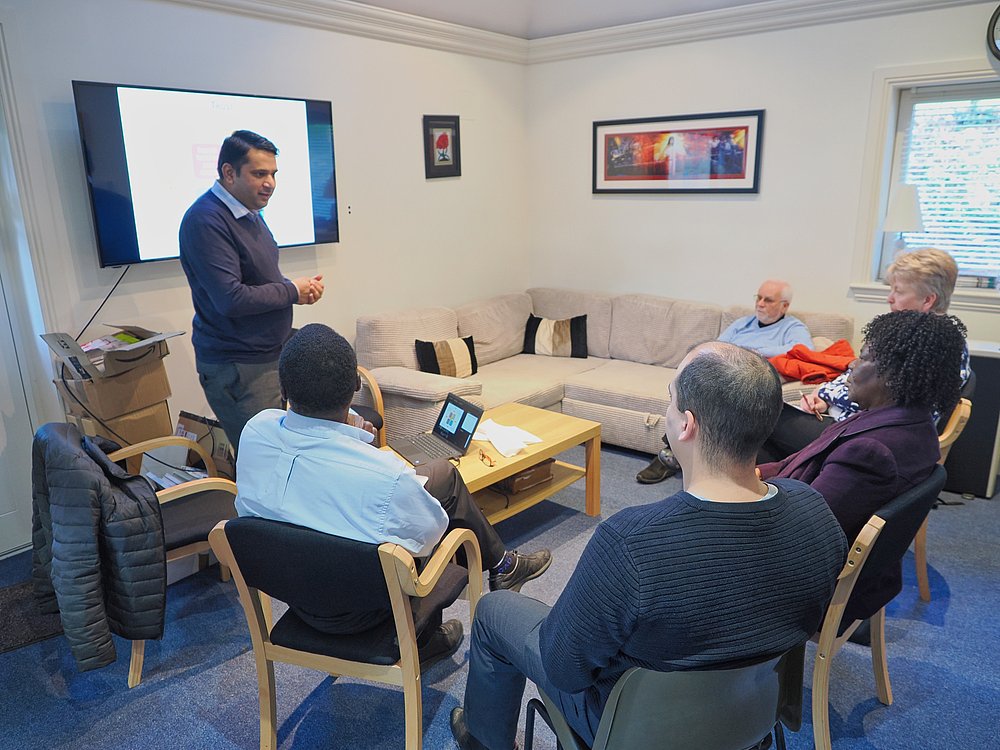 At the end of the event, Pastor Jimmy Botha reflects on the significance of what transpired. "When I pause and think about what the church does to minister in so many places around Scotland, I view in awe what I see happening in front of us. Out of a membership of just over 700, when 100 leaders from our local churches gather to exchange leadership, I know God is busy with something. And it continues from the hunger I saw in our people when at our recent Day of Fellowship, we saw such a significant percentage of our members turn up and worship God." 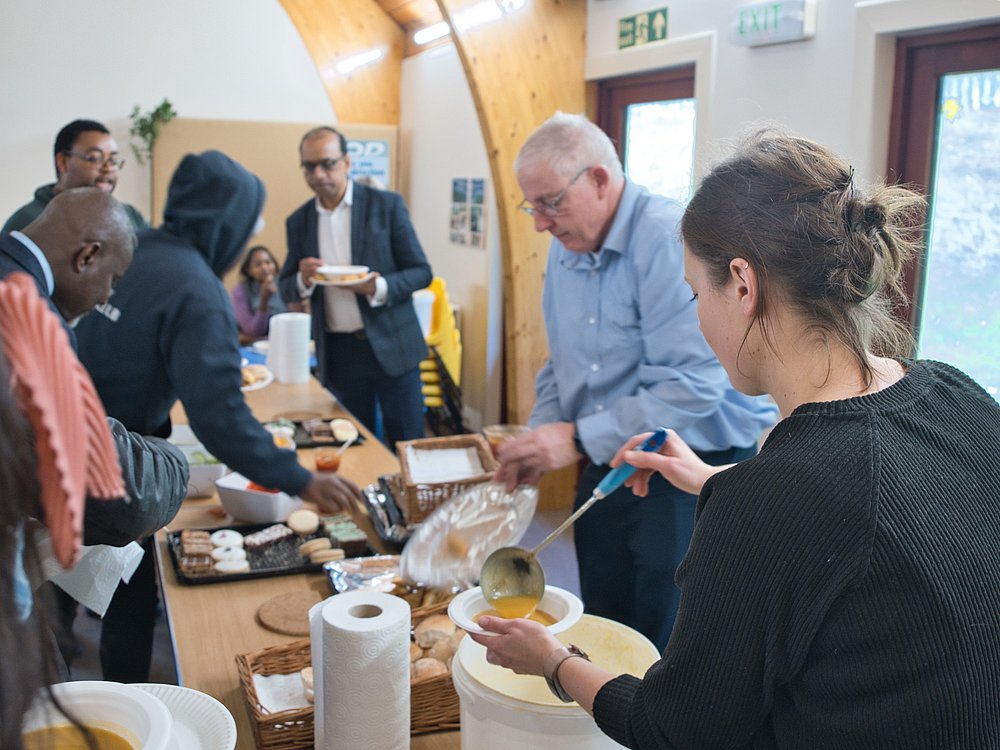 "I believe our members are hungry for the Holy Spirit. I must credit our small pastoral team for their high efforts with our leaders and members. We have a small but dedicated team of pastors and sponsors in the Mission, and their dedication is transferred to our volunteer leaders in local churches. I also must thank and admire our local church leaders, who are all volunteers but most dedicated and always striving to do the church's work professionally. I know the Lord is busy with something. I am excited to be able to work with all these individuals, and I pray that the Lord will keep all our leaders, that His presence will bless the Mission, and that as we venture into 2023, we will see the miracles He has planned for us." 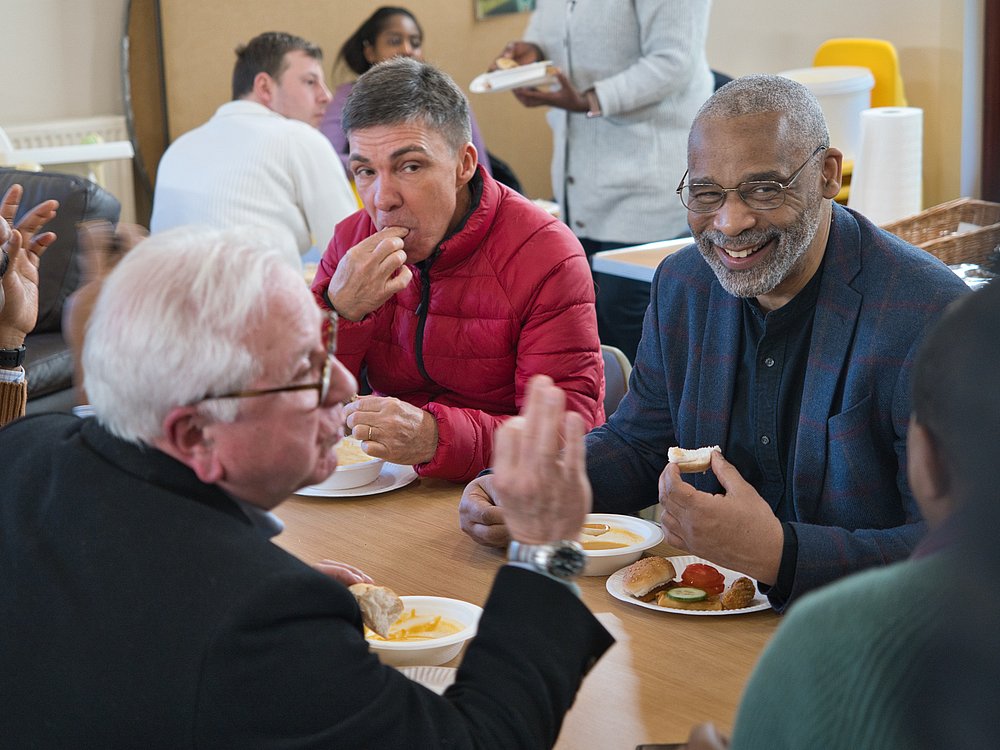 It was a good event. In the words of Aberdeen Elder Manuel Vieira, who travelled five hours to get to and from the event, "It was one of the best Orientation days yet." Not even the long car journey managed to dampen his enthusiasm for what happened on the day.

A larger gallery of pictures from the day is available here.

BUC Orientation and Induction for new ministers and interns